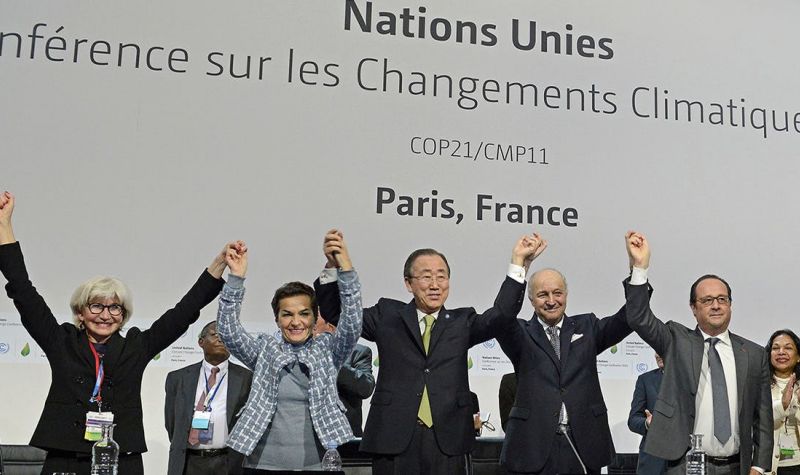 Is the Paris Agreement working?

Climate change is the biggest threat of our century. Possibly of our species. The Paris Agreement was created with the promise to fight such threat. But are we really fighting?

Let’s do a recap. The earth’s temperature has already risen of 1°C since pre-industrial levels. Now, if this doesn’t seem like a big thing to you, try to think about how you feel when your body measures 38 °C instead of 37°C.

That’s how sick the earth is, and the fever is going up. Symptoms among others are catastrophic weather events, loss in biodiversity, fishes with tons of plastic in their stomach and an air so poisoned that citizens are advised to not leave their houses.

To find a cure, in 2015, almost the entire world grouped together and signed the first collective effort to address climate change: the Paris Agreement.

A glimpse of hope and joy for everyone, the vision of a better future with We Are The World playing as a soundtrack in the back of our mind. Felt like being in the 60’s.

197 countries, today 189, with the sole exception of Iran, Turkey, Iraq, South Sudan, Libya, Yemen and Eritrea, joined a common vision. Save the Earth.

Top line of the agreement is to keep global warming below 1.5°C above pre-industrial levels. In order to do so, we have to cut greenhouse gas (GHG) emissions by 50% by 2030. (Quick side note: 70% of GHG emissions come from CO2 coming from fossil fuel burn. Deforestation then plays a big part too, despite some argue forests are private property.)

That’s quite an ambitious goal. And we know there is many a slip between cup and lip.

Having said that, there are two fundamental questions to ask:

1. Are the Paris Agreement pledges adequate to meet the required 50% cut in emissions?

2. Are these pledges actually being implemented?

Well, apparently not. And this is true for both questions.

Scientists argue that the PA targets are way too modest. 75% of the current commitments to reduce emissions are considered partially or totally insufficient. Even if implemented, current pledges would cover less than half of  the emissions reduction needed to limit temperature increase. Currently, they’d bring us to a temperature increase around 3°C.

On top of that, with the growth of economies and population, emissions are forecasted to increase as a consequence. Avoiding an increase would already require a certain effort but cutting it by 50%, needs another type of commitment. In fact, experts say the effort needs to double or triple.

Take China as an example. China’s pledge to cut emissions is bounded to the unit of GDP (Gross Domestic Product).

This means that although they are respecting their pledge of cutting their emission x unit of GDP by 60%, their economy is growing so much that, overall, the emissions are up 80% vs 2005. Same goes for India.

Europe on the other side saw in 2018 a -22% of CO2 emissions vs 1990. The European Union enforced a legally binding climate pledge to reduce GHG by 40% below 1990 levels. This means actions can be taken, for example, through fines against those countries who do not comply with such rules (i.e. annual emissions limit).

Europe is expected to reach 58% reduction by 2030, making its pledge sufficient and the only one to be so among the big 4.

When it comes to the United States, its emissions cuts are insufficient, but the country just rejoined the Paris Agreement after 4 years out. President Biden’s commitments towards climate change seem promising, we’ll check again in a couple years.

Insufficient actions are being taken also by UAE, Kuwait and Qatar (btw, these countries have the highest CO2 emission x person in the world, 50% more than US).

Now, are these pledges, even if insufficient, being implemented?

First of all, the 184 climate pledges are voluntary and not legally binding. The Paris Agreement has no central enforcement mechanism which means the countries are off leash.

70% of these are conditional, which means they depend on the financial help they can get in order to be implemented.

Every 5 years there is a get-together, and the status of the pledges is reviewed. It was obviously hard to reunite 190 countries during a pandemic, therefor the meeting has been postponed to November 2021.

As of today, the forecast is that abut 130 nations (including the top 4’s), won’t most likely meet the 50% GHG reduction goal.

Overall, in order to meet the goal set for 2030, governments should triple their current pledges, with the help and involvement of private sectors and individuals too.

We can all be leaders

Climate change is running faster than we are.

If the goal set by the Paris Agreement, already too weak according to many, won’t be achieved, the economic, human and environmental losses will be irreparable and global.

What is currently done seems to be far from enough, and very slow too.

While we would need to cut fossil fuel by 70% to reach such targets, coal fired power station are currently increasing. Almost 250 are under construction.

But where governments don’t go, private sectors and individuals can go.

About 100 major companies are committed in running 100% on renewable energy by 2050.

Energy efficiency then is a big component and by optimizing it in our houses and offices (heater, AC, lights, isolating windows, solar panels etc.) we can cut up to 40% of CO2 emissions by 2040.

Individually then, well, we know how loud we can be.

The choices we do every day can truly shape the entire market and the demand-supply chain. What we choose to wear and eat, how we travel, what we buy and overall the QUESTIONS we ask governments and companies can truly turn everything upside down.

Leaders can be found everywhere.